The first major benchmark for the Village of Pleasantville’s Manville Road Corridor Improvement Project has finally been reached.

At last week’s Village Board meeting, Rich Williams from Insite Engineering, the company that is overseeing engineering for the work, told officials that the low bid came in at $1.875 million, $34,000 less than what had been projected.

The village received bids from five contractors after requests for bids went out in November.

The project is estimated to cost between $3 million and $4 million, of which $1.6 million will be reimbursed to Pleasantville through a grant from the state Department of Transportation (DOT) that originated from federal money. Since Manville Road is a state route, the work falls under the DOT’s jurisdiction.

In 2019, trustees approved a $2.6 million bond resolution, which incorporates the grant money, to borrow for the project. Last summer, the board authorized an additional $1.4 million, allowing it to finance the project for up to $4 million.

For years, revised budgets and altered designs forced various documents to be resubmitted to the DOT reflecting escalating construction costs.

The village is contributing $750,000 of its own funds toward the expense.

Now that a contractor’s bid has been accepted, the village needs to complete a bid analysis required by the DOT. The agency will review the material and must approve the bid documents. The village cannot make contact with the contractor nor can the company’s identity be revealed until the agency approves the bid, which is expected within 45 days.

Once approved by the DOT, the contractor will officially be engaged for the work. Construction is expected to start sometime this spring.

“A spring start date is what we’re hoping for and to end within the year,” said Village Administrator Eric Morrissey. “The reality is there are so many variables such as material shortages and back orders that may affect the project’s timeline.”

The project was first proposed in 2007 because of traffic safety concerns stemming from the slip lane leading from Memorial Plaza to Manville Road. Work will stretch from Grant Street to Washington Avenue.

The plan is to eliminate the slip lane and install a right-turn lane and a new traffic light at the intersection of Grant Street and Manville Road. Project improvements will include upgrading sidewalks, creating ADA compliant crossing curbs, installing new gutters, drainage, paving, grading and landscaping.

Previously, the board has discussed limiting the scope of the civic space because of uncertain costs 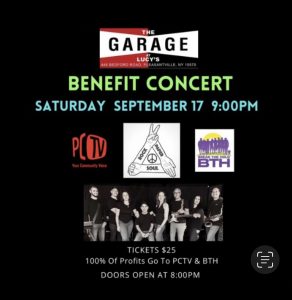